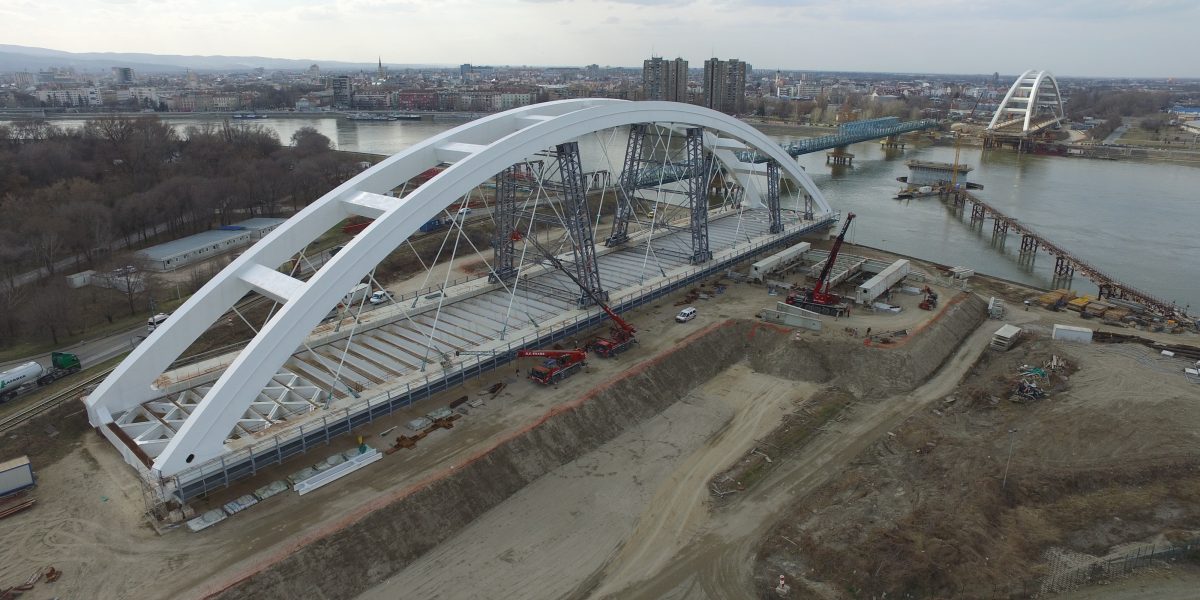 New Zezelj Bridge is railway road bridge (2 tracks + 2 road lanes) + 2 pedestrian – bicycle paths. Bridge system is arch with tie, (arch is required by urban regulation). Material of the main supporting system is steel type S355. Carriageway structure is composite concrete – steel, concrete class C40/50. The Bridge is located at the same old bridge location which was destroyed during the 1999 NATO bombing. Foundation plate of the central pier and one support on the right river bank as foundation plate are the only elements used from a old bridge structure. New bridge is a completely new structure, different from the old one in all features. It stands out as one of the largest spanning bridges in the world of this type (double arch with suspended platform). 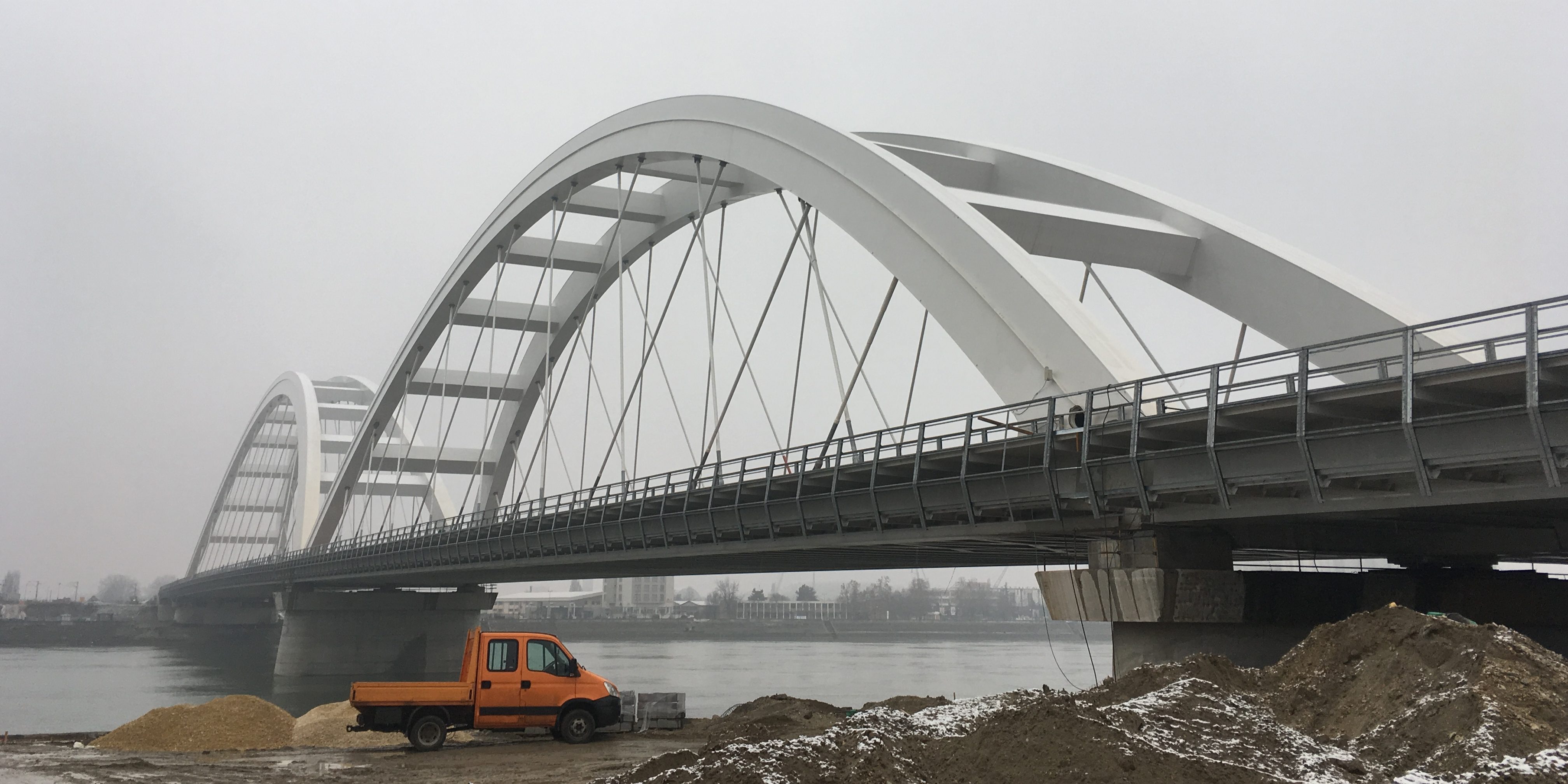 The structure of the bridge is completely formed by steel, supported by two abutments and three piles of reinforced concrete. The central spans are arc-shaped, with 180 and 220 m span, and 34 and 42 m height respectively, of which the board is suspended by a series of inclined cables (80 in total). The other two bays have lengths of 27 and 42 m and are formed by three main steel beams, two lateral and one central. The total amount of structural and secondary steel used in the bridge exceeds 11,000 tons. Total amount of concrete for the carriage slab is 2800m3.

The two arches are being built on land on the banks of the Danube, one on the left (220 m long) and the other on the right (180 m), and when the installation and tensioning of the cables is completed, the each one of the arcs by means of the use of a pontoon of 4,000 TON of load capacity, until reaching the pile located in the center of the river. 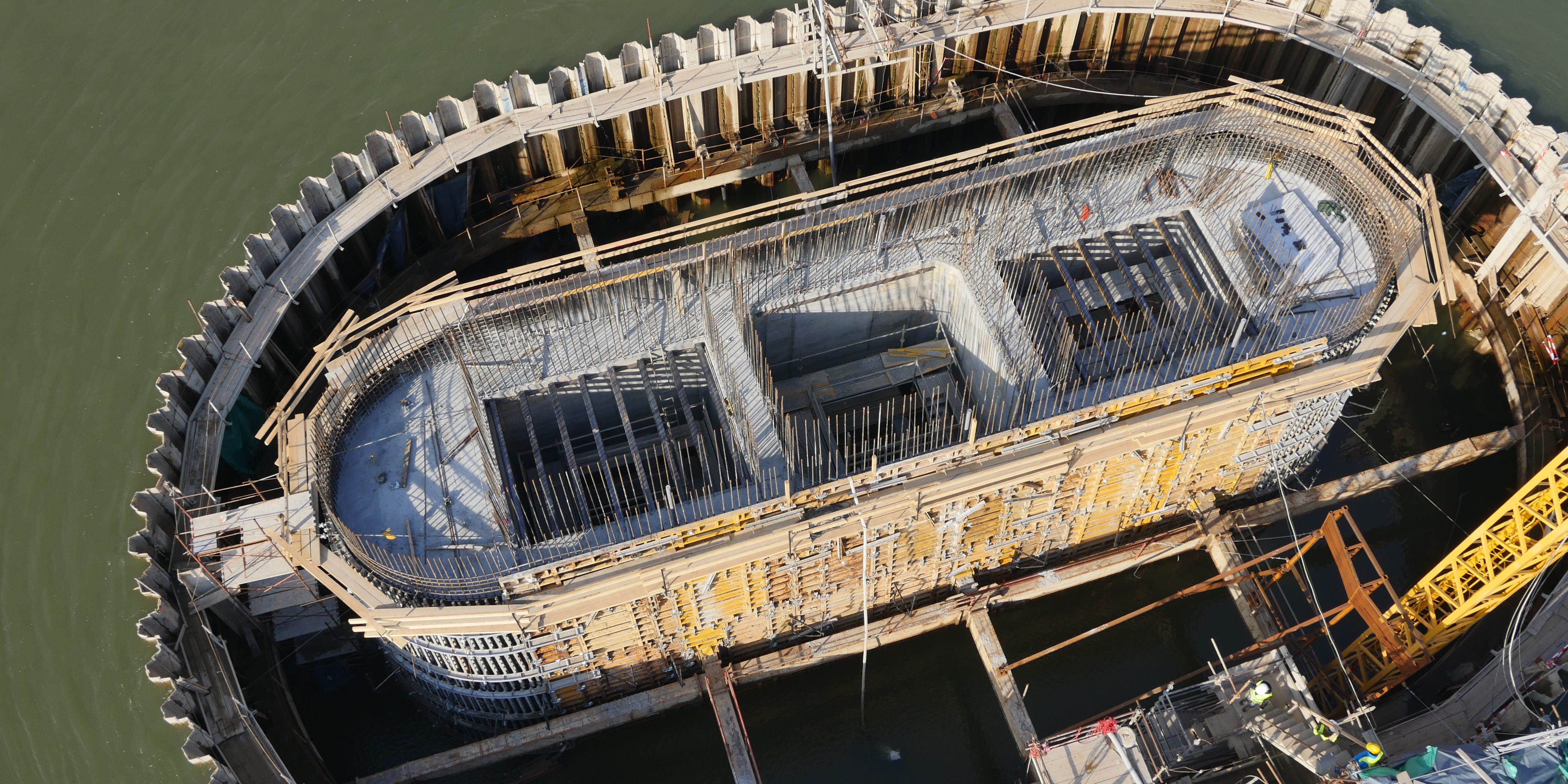 Each arch was built on either side of the river and launched until it rested on the central pile in the middle of the river.   The smallest arch measures 180m long, 32m high and weighs 4,700 tons. The larger arch is 220m long, 42m high and 6,500 tons. The metal structure of both arches has been reinforced to adapt to the high stress levels to be withstood during the different phases of the launch.   It is made up of five different structural systems which allow for its adaptation to the different positions and support during the manoeuvre. This internal reinforcement has been complemented with a number of temporary external piers which help to transfer forces and reactions during the manoeuvre and will be dismantled once the process is completed. 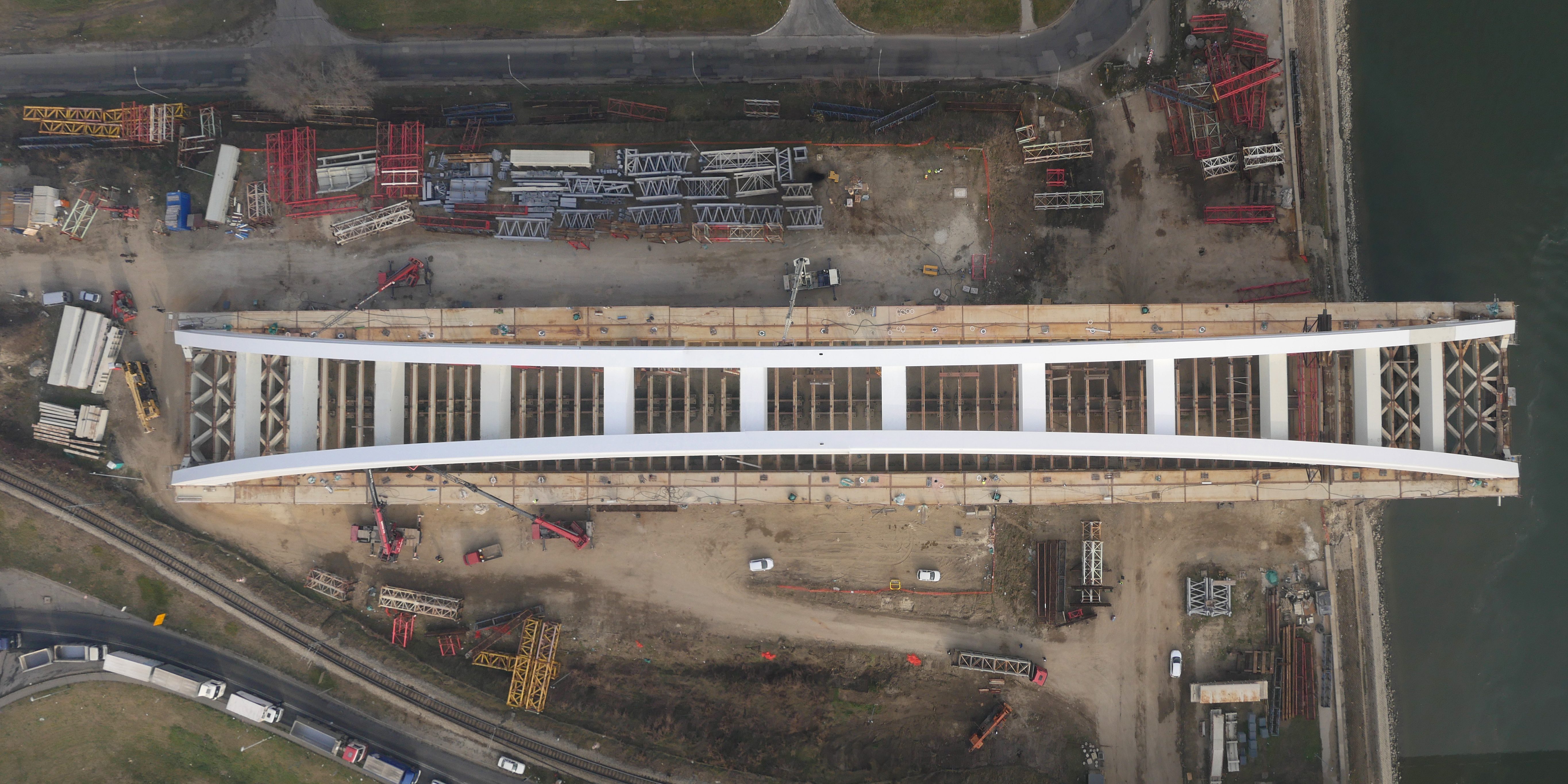 Works on the launch of the arches, began by lifting it to a height necessary he end of August in order to create enough space beneath it to introduce the sliding gear.  Once this launching gear had been introduced, the arches were moved across land until enough of the arches was overhanging the Danube to introduce a pontoon beneath. After installing the pontoons and transferring loads, the arches was floated for until reaching the central pile of the bridge. 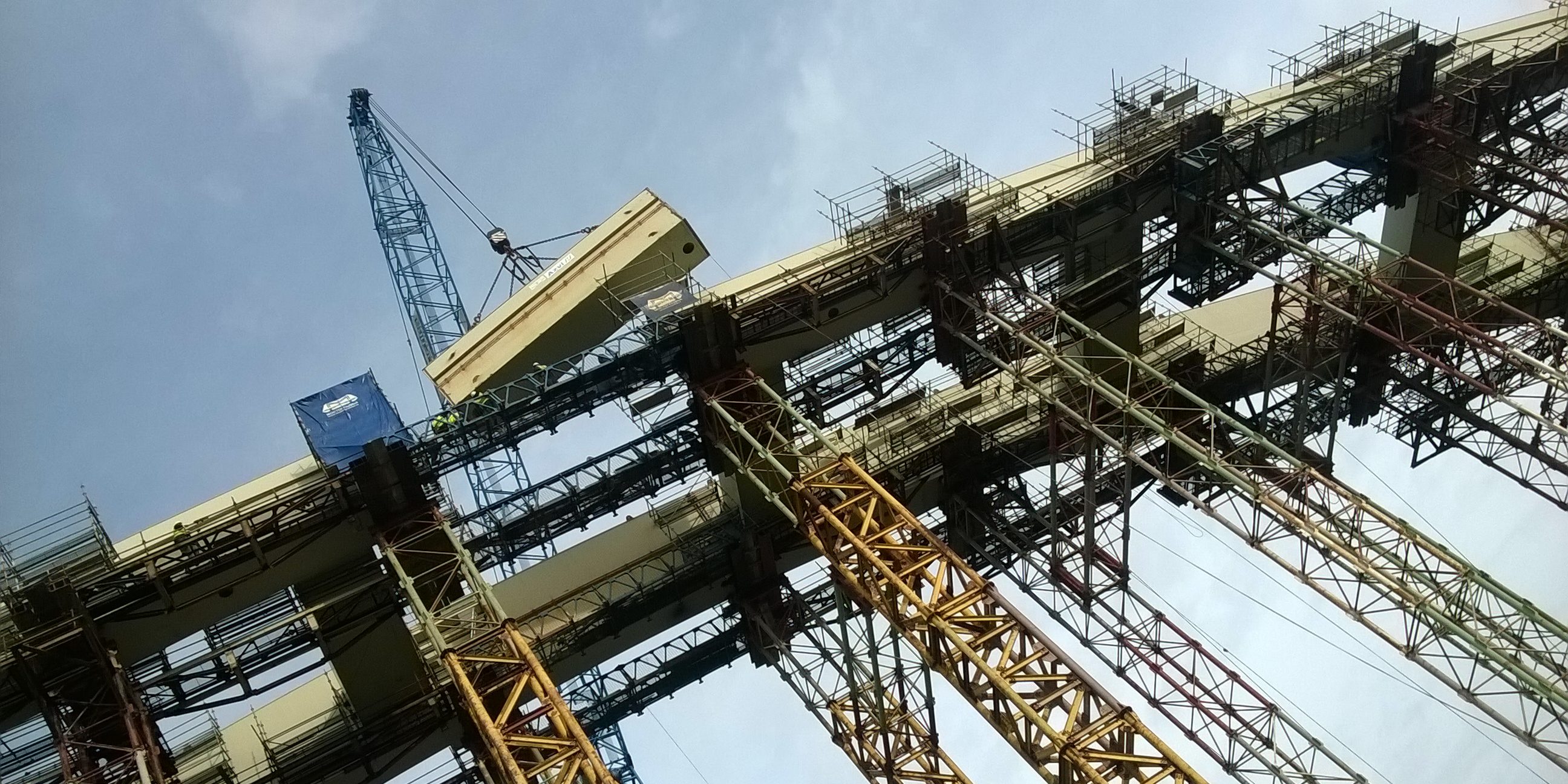 Construction of the new Zezelj Bridge is crucial for the development of road transport in the city of Novi Sad and both freight and passenger rail transport on the Belgrade-Novi Sad-Subotica-Hungarian border line, connecting it to Budapest and the South of the Balkans. The construction of the new bridge is an investment worth 50 million EUR financed by the EU, the Autonomous Province of Vojvodina, and the City of Novi Sad.

Launching of Arches of Zezelj Bridge